The DM Lab would like to introduce to you our newest recruit – Harvey!

Harvey is the newest addition to The DM Lab team. We worked with The Development Manager to recruit Harvey as an apprentice. He is a young upcoming star. Leaving secondary school with a high grade in computing and fresh out of Hereford Sixth Form College. Achieving a BTEC level 3 subsidiary diploma in IT, ready to learn more. We hope to mould Havey into an important part of The DM Lab. We’ve a longterm goal of him becoming a fully fledged digital marketer. The two of us have grown the business this far ourselves, now was a great time to pass on our knowledge and expertise. The ultimate goal of growing the business further in both a size and personnel context. 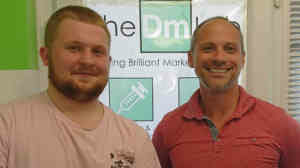 A Little Bit About Harvey…

He is currently a Fortnite fanatic. However his real gaming passion originated from Tom Clancy’s Rainbow Six Siege where he played at a high level. A huge PC gaming fan which further fuelled my love for IT and computers, this lead him to eventually build his own PC, shortly after he began taking apart anything with an electronic component in it. From this he has gained an extensive knowledge of the hardware and software of the computing world.

As well as his gaming background, sports play a large part of his life. Namely rugby. He started playing rugby at Luctonians RFC at the age of 5 and has continued playing since. As well as being a player, he’s also a massive supporter of Worcester Warriors, having many opportunities to visit and support the side.

Harvey does have a slightly adventurous lifestyle, any activity that seems eccentric or outrageous he just has to try it out. This means that he has travelled and experienced some interesting cultures, giving him different perspectives of other cultures and lifestyles. A personal favourite of his was visiting Iceland for a volcanic and glacial expedition. That was a real learning experience which encouraged bonding and team work with people he would not normally interact with in every day life.