The Forgotten Part of the British Economy: COVID-19

As we know the country is in crisis, in the midst of the coronavirus pandemic… 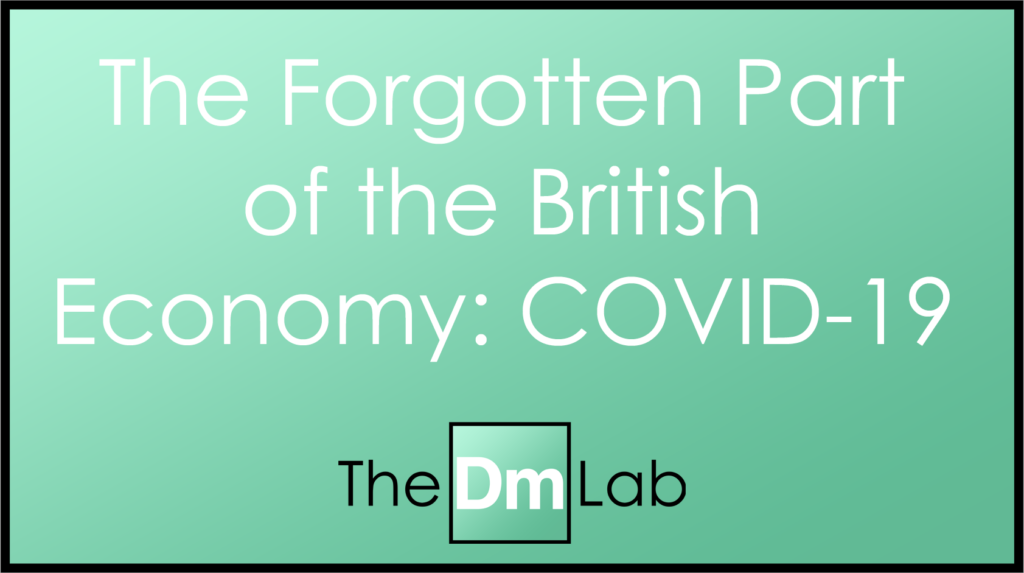 Here at The DM Lab, we are all about paying it forward and supporting businesses / people as much as possible. The government has been working hard to cover as many people through these tough times. These are the employed, self-employed and improving the benefit structure.

However it seems they have forgotten one huge part of the British economy…Us business owners. The ones who are drawing salaries that are made up of dividends and PAYE. Now, it’s important to understand The DM Lab are currently stable and doing well. However like everyone else we need to know what is available if all goes wrong. We rely on all you amazing businesses out there we work with staying open and trading.

These are unprecedented and uncertain times for everyone.

From what we learned yesterday confirmed by Martin Lewis’ tweet, is that if you are a director you would only be entitled to 80% of the PAYE. No profits included. Yet, for some strange reason, those self-employed people are allowed to have their profits included in determining their income. When we started this business we were told to set up as a limited business. This gives you a little more security and is a legal entity. Where is that security now?

Many with limted companies asking who pay through a mix of dividends and PAYE asking what support.

Sorry to say I’ve had it confirmed dividends won’t count. You can get furlough help for the PAYE but dividends fall outside system.

We had a discussion with a friend on Facebook last night who was trying to tell us that we had paid less tax due to our salaries being so low and drawing profits. However, we all know that this is negligible with the amount of taxes we pay elsewhere. For example, corporation tax, VAT and PAYE (for staff). We’d argue as a business we actually pay more. We have to declare everything, there is no cash passing hands. Something that props up the self-employment market.

Don’t get me wrong this is not a dig at the self-employed I’m pleased for them and my rants on FB argued cases for all types of people in society, especially the employed and self-employed

If you are a big business, tax benefits are huge the odd percentage could be millions. For us as a SME it’s not a significant saving. As we said above, we believe we pay more through employment (PAYE) etc.

So this leaves us where?

For example if we furloughed our staff (including ourselves), 2/3rds of our workforce would be earning significantly less than their usual income. In actual fact less than the junior staff.  This would not be enough to cover previously committed to and existing outgoings. What that means is we need to make sure our business stays profitable over the next few months in the toughest period in modern times. How do we do that furloughed our staff?

Then we have no one to do the work?

You can see many are feeling the same… 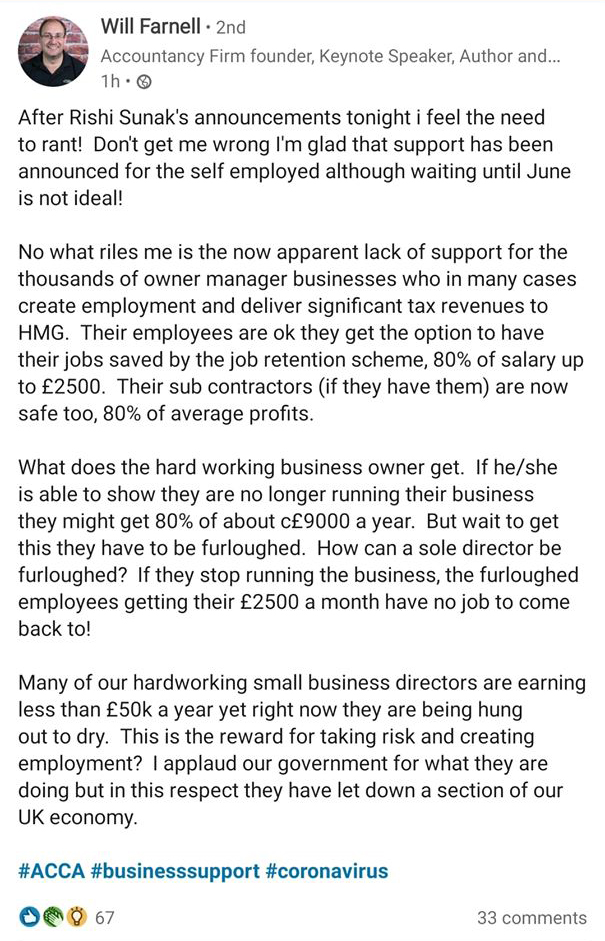 Over 5 million SME businesses in the UK, who will be going through the same turmoil. That is a huge part of the economy. The government has asked us to stand by our employees, work from home and follow the guidelines. We have done all of those. So, the question is, who is standing by us business owners? Without us there is no business. It will be us that foots the bill after all this is said and done!

We all voted Conservative and we back the government, now it’s time to back us!

This for us is why we think they need to look at a social funding model across the board. Anyone that can prove they are in employment, the same amount for everyone, during these tough times. If this isn’t done, some will feel they aren’t getting a good a deal as others, which is currently the case.

Some further thought below from the guys at The Number Crunchers 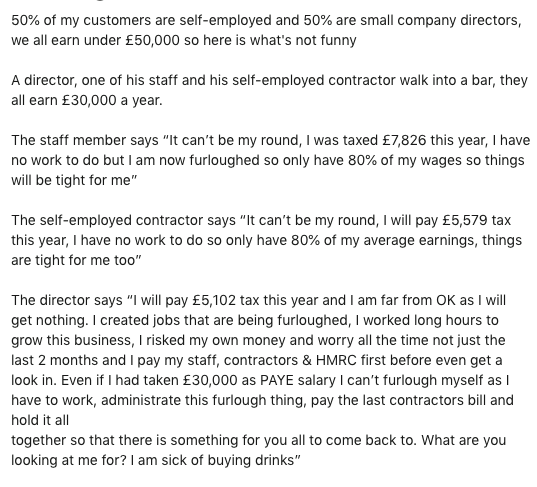 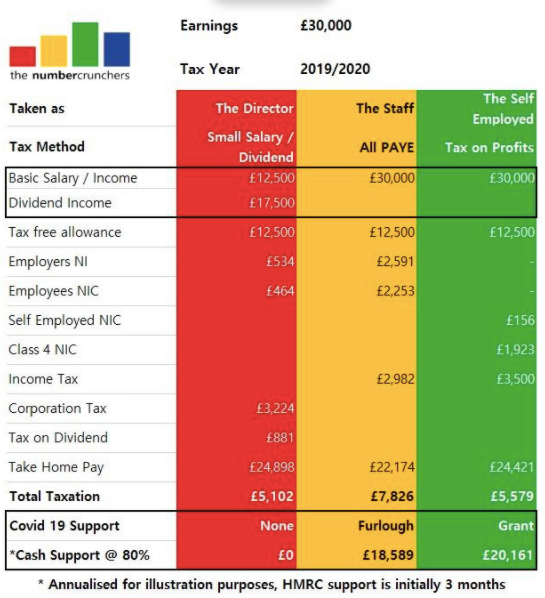