The Dark Side Are Marketing Themselves All Wrong…

I think the Dark Side are marketing themselves all wrong. They’re not bad guys, I mean they look really cool, but the direction they chose is frowned upon a little.

I mean blowing up entire planets, that’s not going to do your image any good now is it? This is the same as black hat SEO. If you’re gonna do something like that then you’re gonna have to pay the price for it at some point. For proof, just watch Return of the Jedi.

Being the best at something and proving it, now that’s something the Galactic Empire does well. They have cool star fighters (who doesn’t love the noise of TIE Fighters / Interceptors?!), they have MASSIVE Star Destroyers then they go and build a moon. Wait, that’s no moon! They’ve only gone and built a fully operational battle station and given it the coolest name – the Death Star!

See, doing something, working hard at it and getting recognition or it speaks volumes. Who wouldn’t want to rule the galaxy? If you’re gonna embark on such a feat, dress like a bad ass, make your army look awesome and build the coolest space ships and eventually you’ll find yourself at the top of Google…..I mean ruler of the galaxy.

They had the right idea, they just executed it all wrong. Underestimating the competition, I mean the Rebel Alliance, a much smaller force who took nothing for granted. They worked hard, believed in themselves and ultimately overcame a powerful adversary / more established business.

It’s how you approach it. You can’t build a fleet to match Star Destroyers, Super Star Destroyers and the Death Star, just like you can’t pump money into AdWords if you just……can’t. Instead, exploit areas neglected by others, like the non-shielded particle exhaust vent leading straight from the surface directly into its reactor core. Exploiting something like this will put you on the front foot. Having faith in one Starfighter / small, dedicated and committed digital marketing agency, for example, is all you need to overcome much larger, more powerful adversaries / businesses.

The digital marketing game is ever changing and always evolving. You need inside information on how to beat the odds. The upcoming movie ‘Rogue One’ (which we’re super excited about) tells the story of how a few individuals steal the plans the rebel alliance use to blow up the Death Star reminds us a little of ourselves and our adventures. Analysing everything to find areas that need to be strengthened in order to succeed and grow. We pick apart every bit of your business to offer up the best strategy for your budget. No, this doesn’t include building a Death Star to blow up your competitors, it means finding ways to exploit areas previously neglected to help you creep up the chain of command……I mean creep up Google.

Finally, in this shameless blog with numerous plugs and anecdotes, no, this is not a trap. 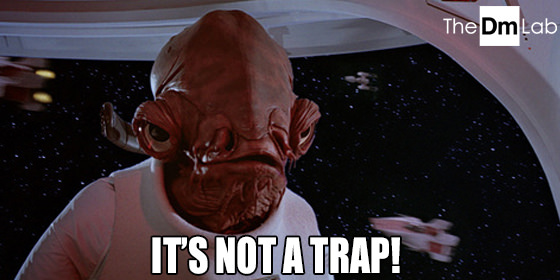