This applies to business growth, financial growth and achievements in 2017. Although we’re going to be sad to see the year end, we’re excited to see what 2018 brings.

January is always a difficult month. Like the Monday of months! Post-Christmas blues, the only good thing was having a clean slate to improve on what we had achieved in 2016. We did, however, kick off 2017 in style with an invitation to the Luctonians Vice Presidents and Sponsors day which was superb! 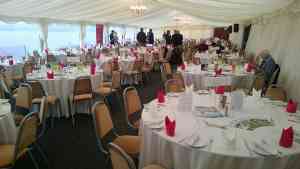 Our 2017 began to gain momentum, picking up new clients and we were contacted by Ledbury RFC about collaborating with a sponsorship deal. Needless to say, we love rugby, we love sponsoring clubs (which already include Belmont Wanderers FC, Greyhound RFC and Luctonians) and we love supporting local sports teams so we were on board! The month was made even more cheery by way of our company accounts submission. Documenting we had made a substantial profit over the previous year of trading! We also had our second company hospitality day at Luctonians. This time as a corporate sponsor for their fixture against Sedgley Park Tigers. Lucs won 23-14 so just added to the day! We also began working with two large clients Solmar Villas and Crown Domestic Appliances.

We reassessed the way we approached work and we wanted to highlight to prospective clients the benefits and the value a digital marketing agency can bring to a company. We wrote a blog to explain how a digital marketing agency like ours adds value. On the flipside of these we began picking up some new clients within the county, developing a website for The Steppes B & B. 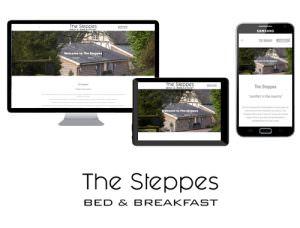 Digital marketing is a difficult ‘thing’ to engage with an audience. We love getting involved in days with a significance and holding little giveaways. In April, we joined in the celebrations of Scrabble Day, cleverly tying in to a blog how piecing together elements of the digital marketing spectrum is not too dissimilar to trying to achieve a high word score in Scrabble. What?! I hear you cry! Read about it here. We also indulged in Alien Day on the 24th (LV-424 – 4th month, 24th day) – we can’t help getting our geek on when there’s a genuine reason to do so!

May sees the St Michael’s Hospice running festival which we took part in. Again, we love what social media can do and we love engaging with our audience. An annual ‘thing’ now for us is to immerse ourselves in May the 4th – Star Wars Day! We love Star Wars and interacting with fellow fans is what we love about it. Is was also a memorable month for Dale as he picked up Foxhounds Player of the Season at Luctonians’ End of Season Awards night.Dale also took part in the British Heart Foundation’s MyMarathon, completing the 26.219 miles in a total time of 3:17:7 and raising £93.57. Read why he took part here. Chris also had the privilege of hosting an awards ceremony for Belmont Wanderers FC. With over 250 people present, including special guests Jim Kenyon and Hereford FC chairman Ken Kinnersley.

Halfway through 2017 and an incredibly exciting month for us. For almost 7 months we worked behind the scenes of the inaugural Sundogs Festival helping to market the event, including setting up and managing social media profiles and developing a website. It was absolutely paramount to us to make the event a success in whatever capacity we could offer as it is something The DM Lab wants to be involved with in the future. A success it was! And as we publish this post things are already in progress building toward 2018’s Sundogs Festival! As well as the great achievements for the Sundogs Festival, Belmont Wanderers also won Community and Regional Charter Standard Club of the Year. 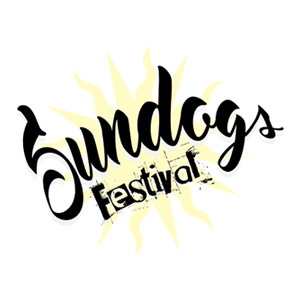 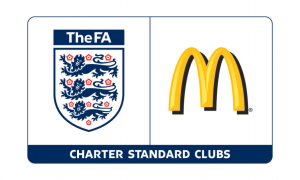 July was an equally exciting time for us. We had picked up loads of work, new clients and kept our existing clients. We were working flat out, almost to capacity. Making a substantial profit and were looking at possibly relocating to a larger premises and we’d advertised for our first full time employee. Which, even now 5 months on, we have not found the right person, so if that’s you please get in touch! As well as knuckling down we also had a bit of fun. Game of Thrones was back on our screens so of course we had a little giveaway. Because we have all sorts of interests, we cross them over into the business. We’re not afraid to indulge in something we love.

Every time we see an opportunity to hold a competition based on whatever is current at the time, we do! Because of this we build a diverse audience which we have no ulterior motive of selling to. No. We just love having fans of stuff we’re fans of. We’ve steadily built a good social media following and since we were over half way through the year, we put together a blog to let our news friends know what we’re all about. July was also a great month bringing on several new clients situated in London, Romford and Milton Keynes. Our presence in these areas is growing rapidly.

We re-established our Google Partnership. Re-established? Yes, most of our marketing jobs covered most aspects but few needed what we had been Partnered for but since then the interest and opportunities reignited so we re-established the partnership. We were also delighted to find out we’d been nominated for the inaugural Herefordshire Business Awards in September and the business was one of three finalists in the ‘Growing Business of the Year’ category! We also reached out to local companies The Beefy Boys and A Rule of Tum to see if they’d be interest in a joint giveaway, however the prizes were sourced rather than a mutually beneficial donation. 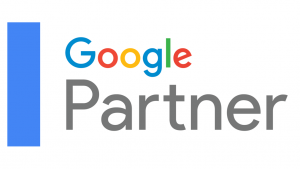 Wow, what a month! Our Visual Scientist (Creative Director Dale) had a month to remember! Turning 35, he was part of a new Guinness World Record for the ‘Longest Continuous Game of 7sTouch Rugby’ then we attended the Herefordshire Business Awards with no expectation just looking to enjoy the night, it was our first of its kind so were excited about just being there! To our surprise – we won! Seeing off Julu Ltd (chosen as one of the Small Business Saturday’s Top 100 small businesses) and Solar Panel Cleaning Services Ltd. 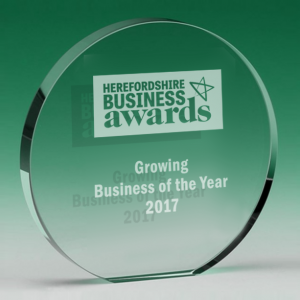 To be recognised for our efforts and growth especially within the local area was incredible for us. Really were over the moon and is most definitely the highlight of the year so far! Our client Caplor Energy also won an award, so we’re officially an award winning company with award winning clients! We also celebrated Roald Dahl Day by teaming up with local company The Children’s Bookshelf to run a competition.

Still buzzing from the Hereford Means Business awards night and winning an award, we were notified that MD Chris had been nominated and was once again one of three finalists at the Sunshine Pride Awards for Entrepreneur / Business of the Year! Those long days and months of graft were now seemingly worth it as once again the business had been recognised locally. We also sponsored a one-off pink shirt for Luctonians to wear for one game to raise money for Breast Cancer Haven Hereford.

Sticking with #BreastCancerAwarenessMonth, on Friday 20th we donned some lovely pink T-shirts of our own, taking part in ‘Pink Shirt Day’ organised by Breast Cancer Haven Hereford. We ordered some pink cupcakes from fellow BID Award winners The Kupcake Kitchen and gave them to the staff at Breast Cancer Haven Hereford, as well as a small donation from The DM Lab. Completely out of the blue we received an email notifying us that we are 1 of 3 Top Marketing Agencies in Hereford as handpicked by a team at Three Best Rated! Looks like the year is really drawing to a close in style for us! Also, our client London Velvet were featured in Vogue!

November began with the Sunshine Pride Awards on Thursday 2nd November. We knew we were one of three finalists. However we didn’t know who the other finalists were. When we arrived at the ceremony, we soon discovered! Merry-Go-Round Nursery (who’d recently opened a third Nursery). The other was A Rule of Tum, who recently won a NATIONAL award for ‘Best Sunday Lunch’. Awarded at the Observer Food Monthly Awards 2017. Very much feeling like the David between two Goliaths, we had pretty much written ourselves off.

To our disbelief, we won! Laura from Scaffolding 2000, sponsors of our category, presented Chris with the award. We did not see that coming! The feeling of winning the award is on par with the feeling that our efforts, once again, are being recognised. Really does make running a small business worthwhile when the hard work gets appreciated. You see the results, but don’t see the hours of hard work that went into it. 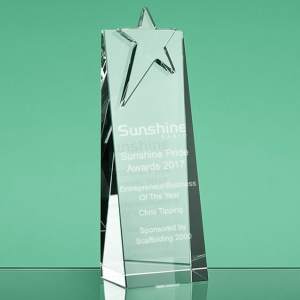 Unfortunately, we couldn’t spend the night celebrating. At midnight of the same night, we were embarking on another fundraiser. This time a 24 hour gaming marathon on Call of Duty WWII for Stand up to Cancer. We raised £70 – beating our target of £50 by £20! Popped into town as well to see the Small Business Saturday bus ready for next month’s SBS. We also met with Sir Roy Strong and we’ve some exciting developments in store working with the team at The Laskett Gardens. November marked the final competition we would hold in 2017. We gave away 2 Lego City Advent Calendars in time for the start of December. Of course, we had one in the office too! Not to mention rounding off the year wearing rainbow laces on Wednesday 29th. Read about why here.

As Christmas approaches we look to get on top of everything so we can have an uninterrupted break. Our tradition is to finish on the day of release of Star Wars: The Last Jedi following breakfast at Frankie & Benny’s at the Old Market. Then watching it at the ODEON. Although we have double the festivities this year as we have a table booked at Luctonians. We also got involved in Small Business Saturday. Offering snippets of our expertise to help small business owners in their online marketing. 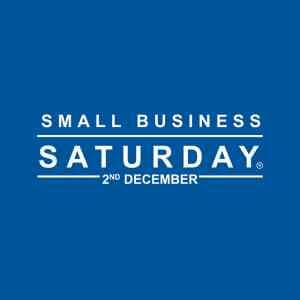 On Friday 8th December we even got featured on Printed.coms ‘Friday’s Favourites‘ blog! Our company Christmas cards we designed and they printed got a mention! If you dedn’t receive one, this is what they looked like: 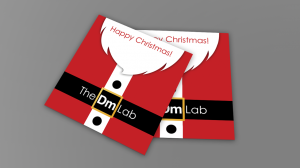 Thank you for taking the time to read about our year. You’ll see that we’re really passionate about what we do inside of work and outside. You’ve probably been a part of our year in some capacity and we thank you for that also. If you are working with us you know what we are about, if you know us you’ll see the passion we have and if you are thinking of working with us please read this sentence again.